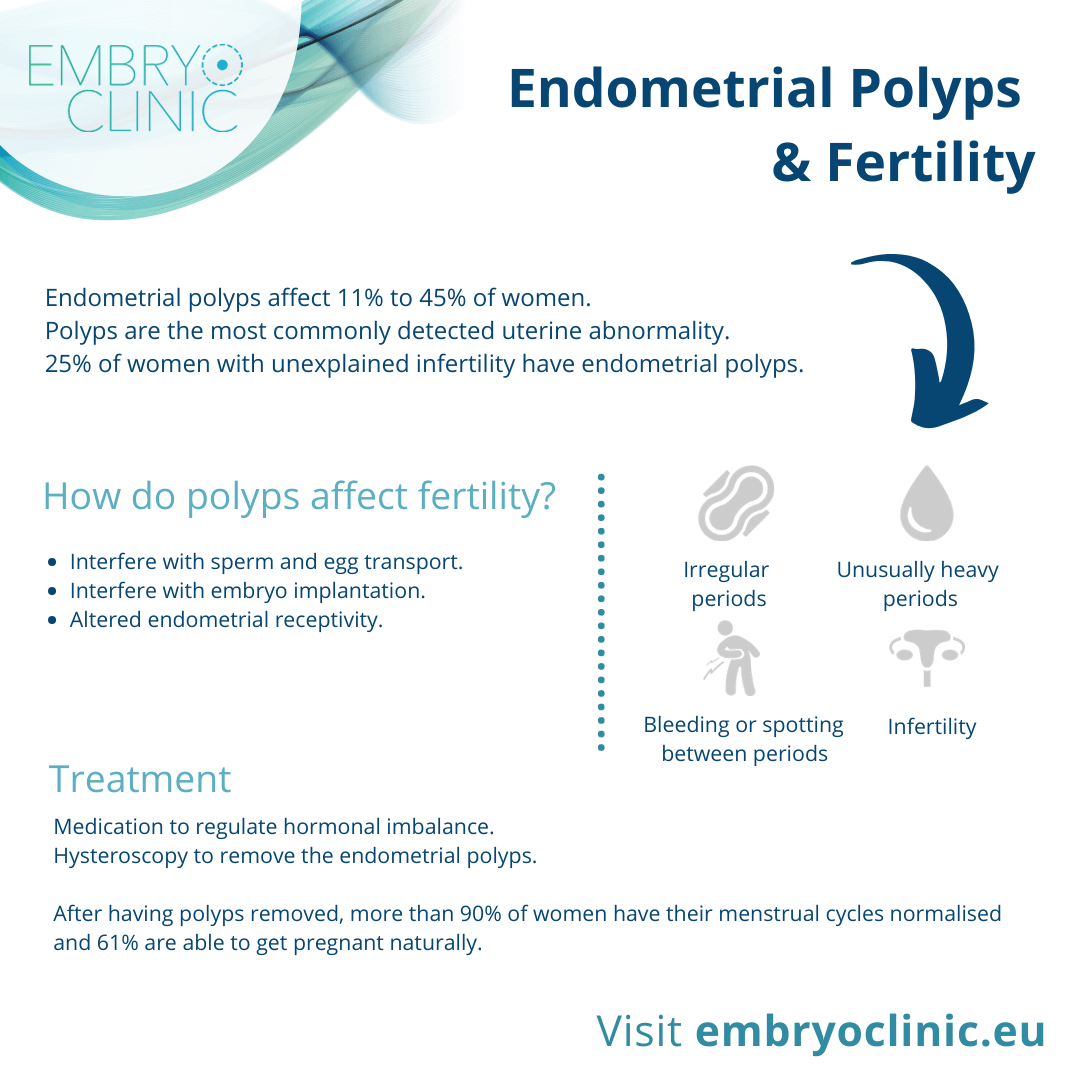 Endometrial polyps are benign and often asymptomatic growths of the lining of the womb, affecting between 11% and 45% of women. Polyps can alter the micro-environment of the womb and interfere with sperm/egg movement, fertilisation and implantation. Endometrial polyps are also the most commonly detected abnormality (16.7 %) in patients with recurrent implantation failures after IVF.

In this article we talk about symptoms, diagnosis and treatment of endometrial polyps to increase your chances of pregnancy.

What are endometrial polyps?

Endometrial polyps are growths that occur in the endometrium, the inner lining of the uterus. They are attached to the endometrium and extend inward into the uterus. The size ranges between a few millimetres to a few centimetres. The reason why some polyps develop is not clear, but researchers believe it may be related to hormone levels.

You are more likely to have endometrial polyps if you are overweight, obese, have high blood pressure or are taking a medicine called tamoxifen.

What are the symptoms of endometrial polyps?

If you have endometrial polyps, you may have the following symptoms:

During routine investigations prior to treatment for infertility, an ultrasound scan will be able to identify if you have endometrial polyps.

Your doctor will start by asking you about your menstrual cycles, how long they last, how heavy is the flow or any unusual symptoms you may be experiencing. The doctor may perform a transvaginal ultrasound, where a small device is inserted in the vagina to check for uterus abnormalities. The doctor may also suggest inserting sterile fluid into the uterus, which will allow for a clearer image of the uterus.

After the ultrasound, the doctor may suggest a hysteroscopy to help diagnose or treat polyps. During this procedure, a small camera is inserted through the vagina into the uterus to give an image of the inside of your uterus. The doctor may do a biopsy of the uterus lining or remove the polyp using special instruments.

If you don’t have any symptoms, you may not need to treat the endometrial polyp. However, if you have heavy periods, bleeding in between periods, if the polyp is affecting your ability to get pregnant or stay pregnant, it should be removed.

Your doctor may suggest some of these treatments:

Up to 25% of women with unexplained infertility have endometrial polyps diagnosed on hysteroscopy.

Researchers believe polyps can cause infertility due to interference with sperm and embryo transport, embryo implantation, or altered endometrial receptivity. The size, number, or location of polyps may also contribute to the outcome.

Several research studies reported that after having polyps removed, more than 90% of women had their menstrual cycles normalised and spontaneous pregnancy increased to 61%.

If you are experiencing any of the signs and symptoms of endometrial polyps or have been diagnosed with unexplained infertility, contact our clinical team.