EmbryoClinic | Getting Pregnant with Endometriosis
Endometriosis affects 1 in 10 women of reproductive age in the UK. It happens when the tissue that normally lines the inside of your uterus (endometrium) grows outside the uterus. Endometriosis often reduces the woman’s ability to get pregnant. In this article we talk about endometriosis, symptoms, treatments and how you can increase your chances of getting pregnant.
endometriosis, pregnancy, infertility
27878
post-template-default,single,single-post,postid-27878,single-format-standard,cookies-not-set,ajax_fade,page_not_loaded,,select-child-theme-ver-4.4.1533193858,select-theme-ver-4.4,wpb-js-composer js-comp-ver-5.7,vc_responsive
EmbryoClinic / Articles  / Getting Pregnant with Endometriosis
4 November 2019

Getting Pregnant with Endometriosis 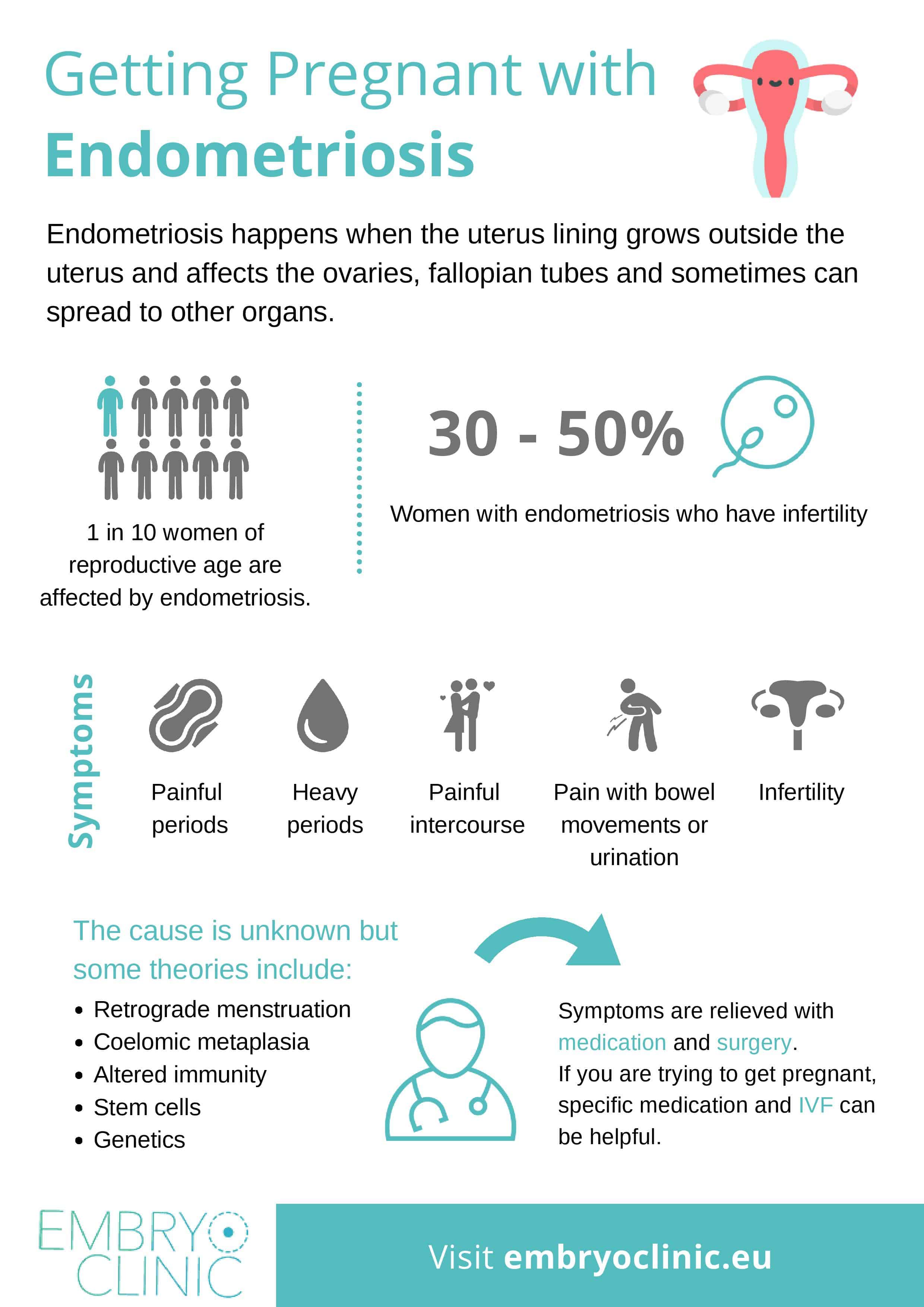 Endometriosis affects 1 in 10 women of reproductive age in the UK. It happens when the tissue that normally lines the inside of your uterus (endometrium) grows outside the uterus. Endometriosis often reduces the woman’s ability to get pregnant. In this article we talk about endometriosis, symptoms, treatments and how you can increase your chances of getting pregnant.

Endometriosis happens when the uterus lining grows outside the uterus and affects the ovaries, fallopian tubes and sometimes can spread to other organs. It is an inflammatory disease dependent on oestrogen and the tissue will continue to respond to hormones just like it would in the uterus: it thickens, sheds and bleeds every menstrual cycle.
Women with endometriosis may feel no symptoms or may have chronic pelvic pain, painful intercourse, pain with urination and bowel movements, and often experience infertility. Because the inflammatory disease depends on oestrogen produced by the ovaries, it usually affects women aged 25 to 35.

The cause for endometriosis is not known but several theories have been reported. These include:
• Retrograde menstruation: when the endometrial tissue is transported backwards, through the fallopian tubes into the abdominal cavity.
• Coelomic metaplasia: when other undifferentiated cells in the peritoneum become endometrial cells.
• Altered immunity: preventing women from clearing the endometrial cells that appear in retrograde menstruation.
• Stem cells: other cells in the body differentiate into endometrial cells.
• Genetics: women who have a first degree relative affected by endometriosis have a 7 times higher risk of developing it.

What are the symptoms?

The diagnosis is mostly done through surgery when the doctor introduces a camera into the abdomen and collects samples of tissue for analysis.

How is Endometriosis treated?

There is no cure for endometriosis, but symptoms can be relieved through medication or surgery. Surgery focuses on removing lesions, which reduces pain and can also improve fertility. Endometriosis often recurs and ongoing medication and multiple surgeries may be required to relieve the symptoms over time.

How does Endometriosis affect fertility?

Around 30 to 50% of women with endometriosis have infertility. The reasons why only some women with endometriosis experience infertility aren’t clear, but research has been presenting several reasons:
• The inflammation and pelvic adhesions cause a mechanical problem, making it harder for the egg to be released, for the sperm to find its way to the egg, impair fertilization and the transport of the embryo into the uterus.
• Another reason may be related to a deficiency of a protein in the uterus. It has been found that women with endometriosis have lower levels of a molecule called HDAC3 in the uterus. This molecule is important for implantation and preparation of the uterus for pregnancy.
• Other possible causes are being explored like inflammatory cytokines, growth factors and genes.

Women with minimal to mild endometriosis have an almost normal chance of conception. As endometriosis worsens, scar tissue (adhesions) become more common and the chance of natural conception can decrease. A study revealed these chances of pregnancy over 3 years are lower for women with severe endometriosis (36%) than to those with unexplained infertility (55%). Some studies have suggested that women with more advanced endometriosis also have poor ovarian reserve, low egg and embryo quality, and poor implantation.

Endometriosis and Getting Pregnant

Most women with mild to moderate endometriosis will be able to conceive without any medical or surgical intervention. In cases of moderate to severe endometriosis, medical or surgical interventions may be the best way forward. As endometriosis is oestrogen dependent, some hormonal medications may be helpful to manage pain. These, however, have not been found to improve fertility, unless you are undergoing IVF. In this case, prolonged treatment with GnRHa before IVF can improve fertility rates. Surgery to remove cysts, adhesions and nodules has also been found to be effective and increase chances of conception.

If you have endometriosis and want to get pregnant, get in touch with us.

We use cookies to ensure that we give you the best experience on our website. If you continue to use this site we will assume that you agree with it.AcceptPrivacy policy