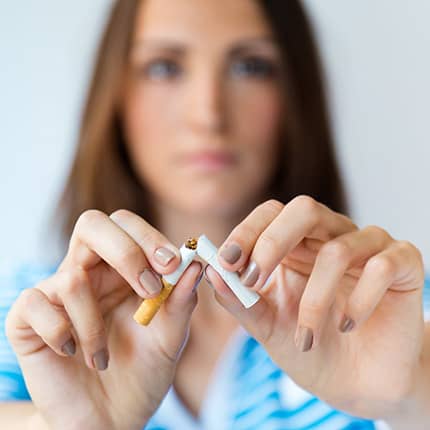 Smoking is internationally recognized as a harmful habit and long term campaigns aim to reduce tobacco use in all ages.  As a matter of fact, the World Health Organization (WHO) referred to “The Greek tobacco epidemic” in a study published by Harvard in 2011 with the prevalence of smoking reaching 41% in adults.  Other surveys report 65% smoking between the ages of 18 – 44 (Global Youth Tobacco Survey, 2014).  In particular, the WHO reports that 37% of the smoking population, among the ages of 25 – 44, are women (2013).

Smoking causes chronic obstructive pulmonary disease, cardiovascular episodes in all ages and some types of cancer, leading to approximately 10.000 deaths / year in Greece (Barbouni A. 2014).  Moreover, smoking has an impact on the fertility of both men and women (Fragoulakis V., Maniadakis N. 2013).  Women who smoke experience menopause 4 years earlier, require higher drug does to initiate stimulation and need twice the number of assisted reproduction cycles to achieve a pregnancy compared to non-smokers (American society for Reproductive Medicine, 2012).  Studies report 40% fewer oocytes retrieved from smokers who have an adjusted lifetime risk of not achieving a pregnancy of 2.71 (Klonoff – Cohen H., 2001).  The chemicals in cigarettes not only affect oocytes but also the quality of sperm and erectile function, and the baby’s health as well.  In short, smoking affects hormone production in men and women, the DNA of both sperm and eggs, the embryo’s ability to reach and implant in the uterus and the environment in which the embryo develops.

Considering that natural fertility starts declining at the age of 32 and more rapidly after the age of 37 (George K., Kamath M., 2010), smoking and age of reproduction are among those lifestyle choices that significantly affect fertility (Sharma R., 2013).  As a result, the necessity for assisted reproduction interventions increases.

On a positive note, some of the effects of smoking on fertility are reversible.  The duration of spermatogenesis is 3 months.  Hence, men who quit smoking 3 months before conception improve the quality of their sperm and increase the chances of a healthy baby.  Women who quit smoking not only increase their changes of achieving a pregnancy, but also significantly reduce the risk of their baby being born prematurely and/or underweight.

It should be noted that second hand smoke has the same effect on fertility as smoking.